One Boy’s Way of Knowing 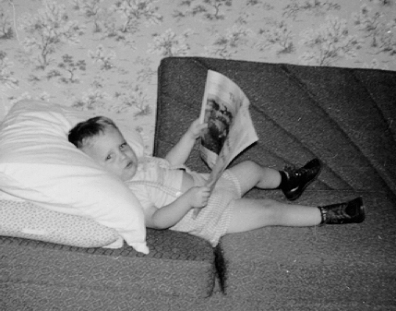 I won’t skirt it—autism takes a whopping bite out of the natural sweetness of life—for both the one living inside it and the family living in its orbit. Autism also brings unexpected wonders. I’ll admit, I felt the bite long before the wonders, but once they appeared, I knew they had been there all along. In this narrative I will explore what I wish I had known at the beginning of these six years since my son’s diagnosis, and not at the end: about the shape of the days ahead, the deep roots of experience that had prepared me, how to distinguish between difference and disability, the imprecise art of suppression, the dead end of blame, the hard choice between action and activism, and the strength of calm. My son Colin, soon to be eight, continues to transform the lives around him with his courage, imagination—and his unequivocally original inventing of the world anew every moment, without self-consciousness, malice or vanity.

My son’s autism is far from the extreme cases in the news. Yet, as millions of other families not in the news can attest, autism is impossible to ignore. In its broad range of severity, autism can bring out the best and worst in us; its mysterious spectrum of symptoms and gifts enriches and/or pulverizes the lives it touches. Yet, life moves implacably on—harsh and beneficent—in autism’s shadow and light. It’s another thread, and not the darkest, in the ongoing struggles within a circle of family and friends: Cancer, Cystic Fibrosis, Spina Bifida, Diabetes, divorce, suicide, strokes, bi-polar disorder, fatal accidents, the memory of lost children, heart attacks, Lou Gehrig ’s disease, drug addiction, and alcoholism. The same year our son was diagnosed with autism, my sister endured surgery and chemotherapy for breast cancer and my father fought the day-to-day battle from the effects of radiation treatments for prostate cancer. A few years later my wife’s brother fell forty feet to his death during the routine trimming of a cottonwood tree.

Autism is layered onto life struggles, often far more severe, that continue to unfold all around the lives that encounter it. And, it’s not all catastrophe and triumph: Life continues with the petty irritations of office politics, traffic, laundry, mosquitoes, dinner dishes, insomnia, car repairs, and lawn mowing. And, let’s remember, along with the solace of lovemaking, newborn babies, the rising and setting of the sun, playing an Irish reel or slip jig, a backyard game of tag with a five-year old, reading in bed, the Moon in the night sky, J.S. Bach’s intricate melodies, and Thai cuisine.

I’m not an expert. I can’t lay out a ten-step plan to cure autism, or describe my journey to the far corners of the earth in search of miracle therapies, or unveil the conspiratorial failure of institutions, or describe my plunge into political activism. What I can offer is my own encounter with a mystery beyond my grasp. I can attempt to imagine how the world might look and feel to my extraordinary son, but it’s not lost on me that I’m attempting the impossible. But there’s hope in the attempt. Shared experience forces memory to deliver up its secrets: the knowledge we need most. I offer the only thing I really can offer: one more particular way of knowing the world. One boy’s way of knowing.

A writer focused on the transforming power of memory, autism, parenting, and the ways we know what we know.
View all posts by slcantwell25 →
This entry was posted in Essays and tagged "autism" "parenting" "ways of knowing". Bookmark the permalink.

2 Responses to One Boy’s Way of Knowing